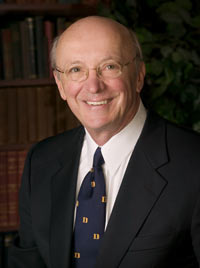 Dr. Friedel is a Distinguished Clinical Professor of Psychiatry at Virginia Commonwealth University and Professor Emeritus at the University of Alabama at Birmingham. He received his undergraduate and medical degrees from Duke University and completed an internship in internal medicine and a residency in psychiatry at Duke. He served for two years as a research fellow at the National Institute of Mental Health in Bethesda, Maryland.

Prior to his retirement from full-time academic work, Dr. Friedel was Heman E. Drummond Professor and Chair of the Department of Psychiatry and Behavioral Neurobiology at the University of Alabama at Birmingham. He has also served as chair of the departments of psychiatry at Virginia Commonwealth University and the University of Michigan, and Executive Director of the Mental Health Research Institute at the University of Michigan. Dr. Friedel worked for six years in the private sector as Senior Vice President, Physician-in-Chief, Director of Research and a member of the Board of Directors of Charter Medical Corporation.

Dr. Friedel’s research interests have focused, in part, on developing effective pharmacological treatments for patients with borderline personality disorder, and on identifying biological defects in patients with this disorder. He has founded Borderline Personality Disorder Clinics at both UAB and MCV/VCU. In addition, he has published a book for patients with borderline personality disorder, their families, and mental health professionals titled Borderline Personality Disorder Demystified. The second edition of this book is in press and will be published in February 2018.

Dr. Friedel is the Chief Medical Consultant of the Black Sheep Foundation, a recently formed foundation for the advancement of awareness about and increased funding for research on borderline personality disorder. He is on the Scientific Advisory Board of the National Education Alliance for Borderline Personality Disorder (NEA-BPD) and was named a Psychiatrist of the Year in 2007 by the National Alliance on Mental Illness (NAMI). He is the founding editor and the co-editor-in-chief of Current Psychiatry Reports and has served for over 20 years on the editorial board of the Journal of Clinical Psychopharmacology. He is a member of Alpha Omega Alpha Honor Medical Society and a number of other professional and scientific organizations. Dr. Friedel has published over 100 scientific articles, book chapters and books, and is listed in Who’s Who in Medicine and Healthcare and in Who’s Who in America. He lives in Virginia. 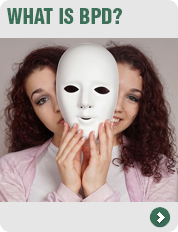 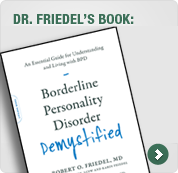