Course Of The Disorder

Adolph Stern’s comprehensive description of the main features of borderline disorder in 1938 5 (see History page) was followed by almost forty years of general inattention to and pessimism about the disorder. Among many of those who knew something of it, borderline disorder was rarely discussed in academic teaching programs, considered in the process of psychiatric diagnosis,  and was typically regarded as an ill-defined disorder that rarely improved, even with the treatment then available. However, over the past thirty years, a rapid expansion of research on borderline disorder has greatly altered these facts.

The following is a brief description of some of the most important and valid current facts about the course of borderline disorder that have emerged from this body of research.8 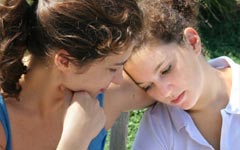 The full spectrum of symptoms of borderline disorder appears most commonly in the teenage years and in early adulthood. This enables early treatment of the disorder during a critical period of development.

It is difficult to diagnose the disorder accurately in children, but. behavioral precursors may be evident in early childhood. In some individuals, the symptoms may first become evident in mid to late life and are often associated with the loss of a long-term, important individual.

After their onset, the symptoms of borderline disorder initially increase in number, frequency and severity, especially if untreated. Symptoms often occur episodically on a background of otherwise relatively normal behavior.

These episodes of acute symptoms are most commonly triggered by stressful situational events, such as arguments with parents or boyfriends/girlfriends, separations, family gatherings, changing schools, starting college or a new job, or moving. As time passes, some symptoms may become less severe in intensity, such as impulsivity and general social functioning. Other symptoms of borderline disorder often remain fairly stable over time, including impaired emotional control, self injurious and suicidal behaviors and  poor tolerance of separations from important others.

The number and severity of symptoms of borderline disorder vary considerably from one individual to another. You may have the minimum of five of the nine criteria required for the diagnosis of the disorder, at mild to severe severity. Or, you may have eight or even nine of the criteria, also varying in levels of intensity. Also, you may fall somewhere between these two extremes. If you have one to four of the nine criteria, you are considered to have traits of borderline disorder, but still benefit from treatment depending on their severity and the degree of their disruption.

The general prognosis, or expected outcome, for people with borderline disorder is now considerably more positive than previously believed. Recent studies report that up to 88% of people with the disorder experience significant improvement over time with appropriate treatment. 8

The degree of improvement  depends on a number of specific factors, most importantly, effective treatment. The most important of these include:

Indicators of less positive outcome: high initial severity, early history of sustained emotional, physical or sexual abuse and neglect, impulsivity, substance abuse, poor quality of past and current relationships, presence of PTSD, and a family history of mood or substance use disorders.

It is important to realize that these indicators are not equally important. Also, if you have some, or even many of indicators of poorer outcome, with effective treatment by experienced clinicians you can still experience substantial improvement in your symptoms, and in the quality of your life.